Mt. Horaiji, in Aichi Prefecture, is one of many areas connected to Naomasa Ii. He became one of the 4 main generals serving under Ieyasu Tokugawa, and served as the feudal lord of Hikone, an area famous for the character “Hikonyan”. This temple featuring a rough, rocky background is called Horaiji, and is the main mountain of the Shingon Buddhist Gochi sect created in the year 703. This is a place filled with spiritual energy, where legend says that Ieyasu Tokugawa’s mother, Odai No Kata, prayed for a child and was blessed with Ieyasu. It is also the location where Naomasa, who had been targeted due to political conflict, took refuge when he was a child.

Mt. Horaiji is the remnant of a volcanic eruption 14 million years ago and features exposed rhyolite. It’s long been considered a sacred mountain in Shugendo belief. Nowadays, you can easily drive to the vicinity of the main hall.
However, you can also get to the hall by experiencing the more majestic and captivating climb of 1,425 stone steps while looking out at the Niomon Gate and Kasasugi, which is a nearly 60m(196ft) tall cedar tree.
If you have the time, put on some walking shoes and try the climb yourself. The view from the front of the temple is breathtaking!
Okumikawa’s scenery lacks forbiddingly tall mountains, despite its significance in Shugendo belief, and so you can visit it quite easily compared to other sites, which is nice.

Well then, after visiting the temple, let’s also head to the adjacent Horaisan Toshogu Shrine. Like the Nikko Toshogu, it’s one of the three major Toshogu shrines in Japan built under the direction of Ieyasu’s grandson, Iemitsu Tokugawa. A bright red Gongen-style shrine enveloped in thick trees. There’s a very sacred air about it. Iemitsu Tokugawa, the 3rd Shogun, instructed the shrine to be built after hearing the legend about Ieyasu Tokugawa’s birth story at Horaiji. 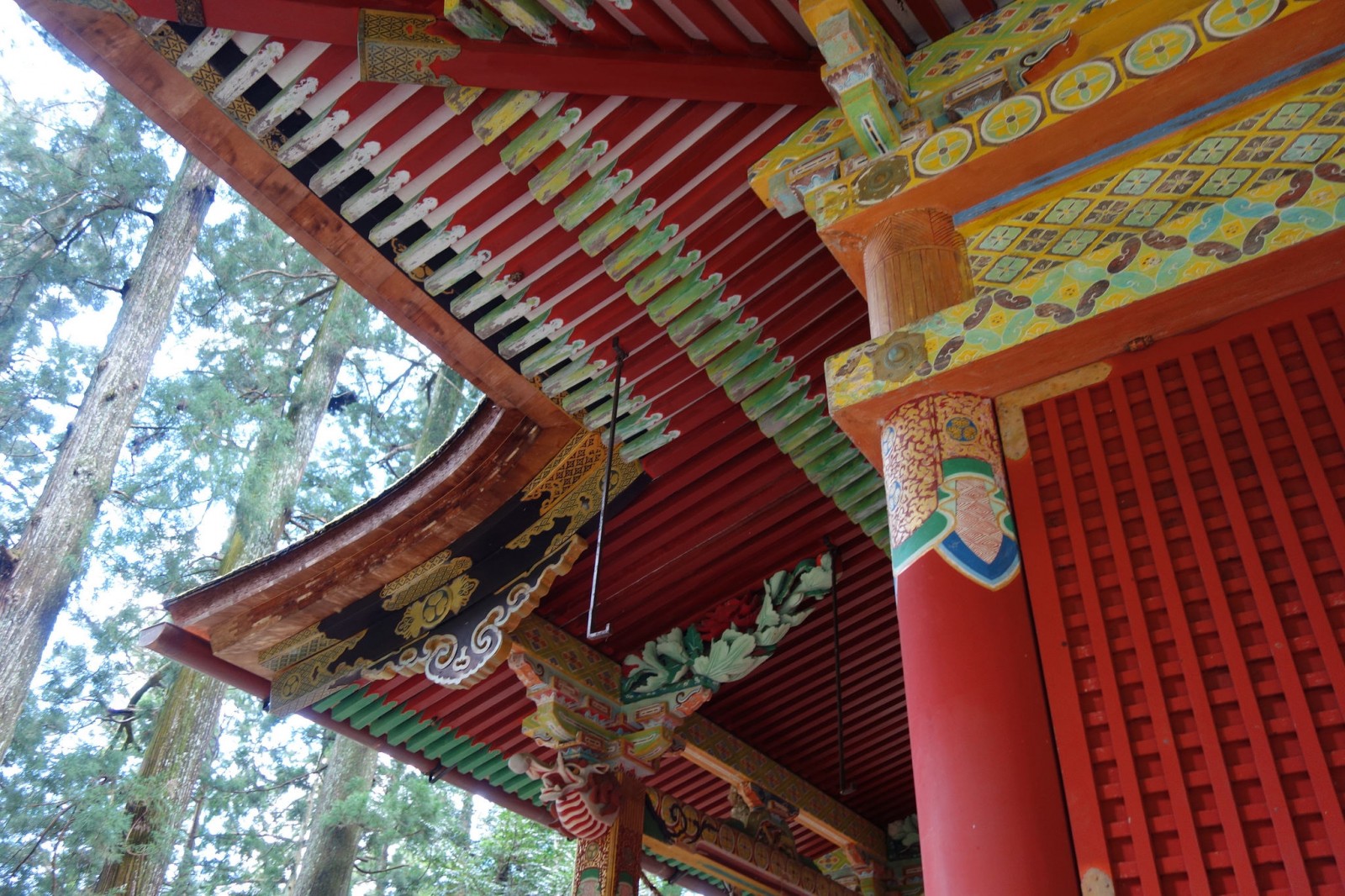 The gorgeous architecture built around the same period as the Nikko Toshogu is a highlight.

This temple actually has a number of connections and stories related to the Tokugawa clan. For example, this Aoi family crest is in a rare shape that was only used up to the time of Iemitsu.

I didn’t realize until being told by the priest, but the stem of the Aoi is in the shape from the Edo period, and different from the shapes found afterwards.

They had a large number of documents in the shrine office, and when I asked them about the architectural style and history of the structure, they explained everything in great detail.

The story behind them is moving.

What do you think those 2 round stones in the back are?
Actually, they’re guardian dogs.（※Called ‘Koma Inu’, guardian dogs are stone sculptures often placed at the entrances to shrines, etc. They prevent evil spirits from entering holy areas.）

Dating from 1651, 1940 and 1990, the oldest is at the back and the newest at the front.
Soldiers who went to war would carve pieces from it and take it with them to battle, believing the luck of Ieyasu would protect them from bullets and other projectiles. It’s very sad to see just how small and round the first and second dogs have become. We must all wish that times of peace will continue endlessly, and the third dog will never be carved by anyone. Despite Horaiji having such a rich history and beautiful view, it’s still comparatively unknown throughout Japan, and you can relax and experience it at your leisure.

A hidden hot spring nearby, Yuya Onsen, features a wonderful inn and it’s lovely to spend some time there and take a stroll through the area.

The Iida Line, which houses the nearest station to Yuya Onsen, is a fan favorite among railroad lovers as it runs through very secluded, mostly untouched regions.