A Trip to Mt. Horaiji, a Spiritual Place Connected to the Tokugawa Clan

Togo Murano(村野藤吾 1891 -1984) , the architect, with his strong commitment to excellent craftsmanship, has many fans especially among Japanese people.

He was a master of the craft who ruled over the architectural world of the Showa Era, and was referred to as “The Kenzo Tange of the East, and Togo Murano of the West”.

The Nissay Theatre in Hibiya Tokyo, often mentioned as one of Murano’s masterpieces, occasionally holds free architectural tours, so I decided to drop by.

A guide kindly explained a great deal about Murano’s nearly paranoid-level commitment to his style, so I’ll be introducing this unique architectural space while adding what I learned.

It’s rumored that some of the mountains in Spain disappeared because of the sheer amount of beautiful, white marble used. Murano was very particular about eliminating the border between the floor and the reception counter in the photo, and so it looks almost as if it has grown up from the floor.

From trash bins and stands to ash trays, nearly everything located within the theatre was originally designed by Murano. 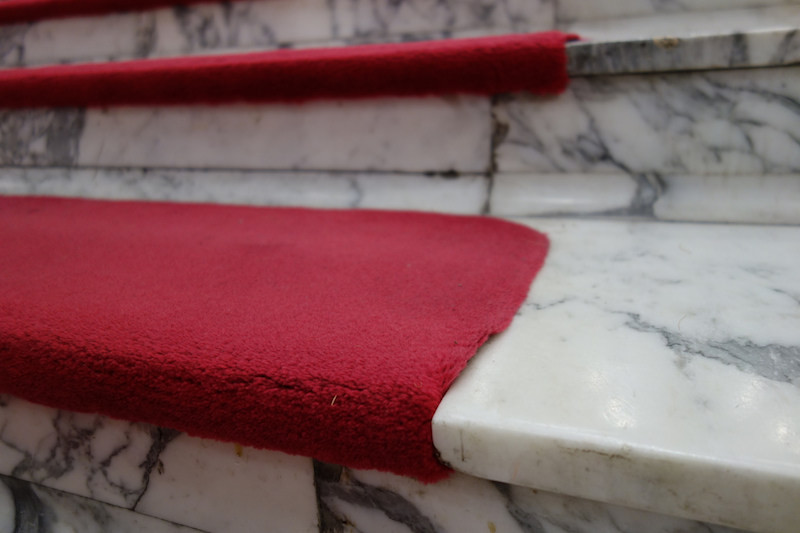 And the red carpet of the stairs leading to the theatre floor is not actually placed on the floor, but the marble has been hollowed out and the carpet embedded. (!) The handrail with its elegant, delicate curves, was created with the image of “a gentleman reaching out to a lady.”

One of Murano’s famed architectural pieces, the elegant spiral staircase.

Apparently, Murano was very particular about the back of this spiral staircase being perfectly smooth, and didn’t overlook even the smallest of irregularities. If you touch it, it really is incredibly smooth, and you can almost hear the groans of the tired workers from the time it was made. The ceiling inside the theatre is akoya pearl oyster, and the walls are glass mosaic tiles. Together they create a wide-open, dreamy space that almost makes you dizzy. It is said that no matter how hard the skilled craftsmen worked, the task of sticking the tiny pieces of baked glass onto the wall only progressed about 10cm(3.9in) per day. And apparently, during the final check, Murano was displeased with this corner of the theatre door marked in the photo and personally added a small accent. From the eyes of an amateur, the need for the accent is a complete mystery…

When looking at the way the chairs are aligned, perhaps a number of people feel it’s a little “insane” or “like a nightmare.” Murano was famous as an extreme perfectionist. When taking a tour of another of his works, the Meguro Ward General Government Building, a guide said that Murano looked up at the ceiling 7 floors above himself and said “I need to move that 10cm to the right…” or something along those lines. (That eyesight is nothing to laugh at, either…!)

I asked the guide, “Weren’t there any craftsmen at the time devastated after hearing that?” to which he replied, “Well, he was a god, so…” It seems everyone at the time followed Murano unwaveringly.

The pure passion and desire to create something truly good along with an extraordinary level of perseverance created a piece of architecture which is still cherished today.

That being said, the ‘perfect’ structure originally envisioned by the master Murano has been partially altered due to unavoidable circumstances such as creating a barrier-free space, the addition of LED lighting, etc.

Although I’m not personally connected to the architecture, even I thought “Murano must be rolling over in his grave over these changes…” and felt a bit worried. If you stop by sometime, I recommend you stop and take the time to take in all the details of the building. I think it deserves to be a world heritage site.

The number of buildings left by Togo Murano is decreasing, but some remain, so if you ever travel around Japan you should definitely add them to your list of sights to see.