Have you ever paid attention to the komainu (狛犬 guardian dogs) at shrines?

Check out her top five fanatical komainu spots in Japan!

−−First of all, what are komainu anyway?

From the historic literature, we know that they have been used as furnishings of the nobility since the late Heian period (1100s AD).

They started out as wooden komainu. As they gradually moved outdoors, materials were used that were more resistant to wind and rain, such as stone.

Komainu are made of various materials, but the ones I am following will be the stone komainu on the approaches to the shrine.

−−What is their role?

They are largely believed to protect something precious. Originally, lions and guardian dogs were furnishings placed in front of bamboo blinds by nobles in the Heian period.

This is also the main difference between komainu and Shisa (an Okinawan lion or lion-dog statue placed as talisman against evil at entrances and on roofs), which are used to protect people’s homes and villages.

On the whole, komainu are not placed in houses.

−−Why are komainu so attractive?

Before the early Showa period (1926-1989), they were hand-carved by stonemasons, so each piece has its own individuality.

There are also trends in different regions and times, so you can encounter designs with different styles both locally and when you go out. You can find replicas of many of the komainu that were popular in one area in nearby areas, and it is fun to compare them.

In a good way, when you come across a work that has not been copied correctly, you will experience a relaxing feeling that will make you feel at ease and smile without even realizing.

−−For those who would like to start appreciating komainu, what are the main points to look for?

I think the overall shape and the face are the first things you see. In addition, the design of the tail and fur are also unique and fashionable, so please do check them out.

If you like history, you should definitely check out the pedestals. It often says who dedicated them, when, in which city, and who made it, so it’s a great clue to the history of the area.

Searching for the name of the person engraved on the pedestal, I sometimes came across a record of money lending or a connection to a famous person. 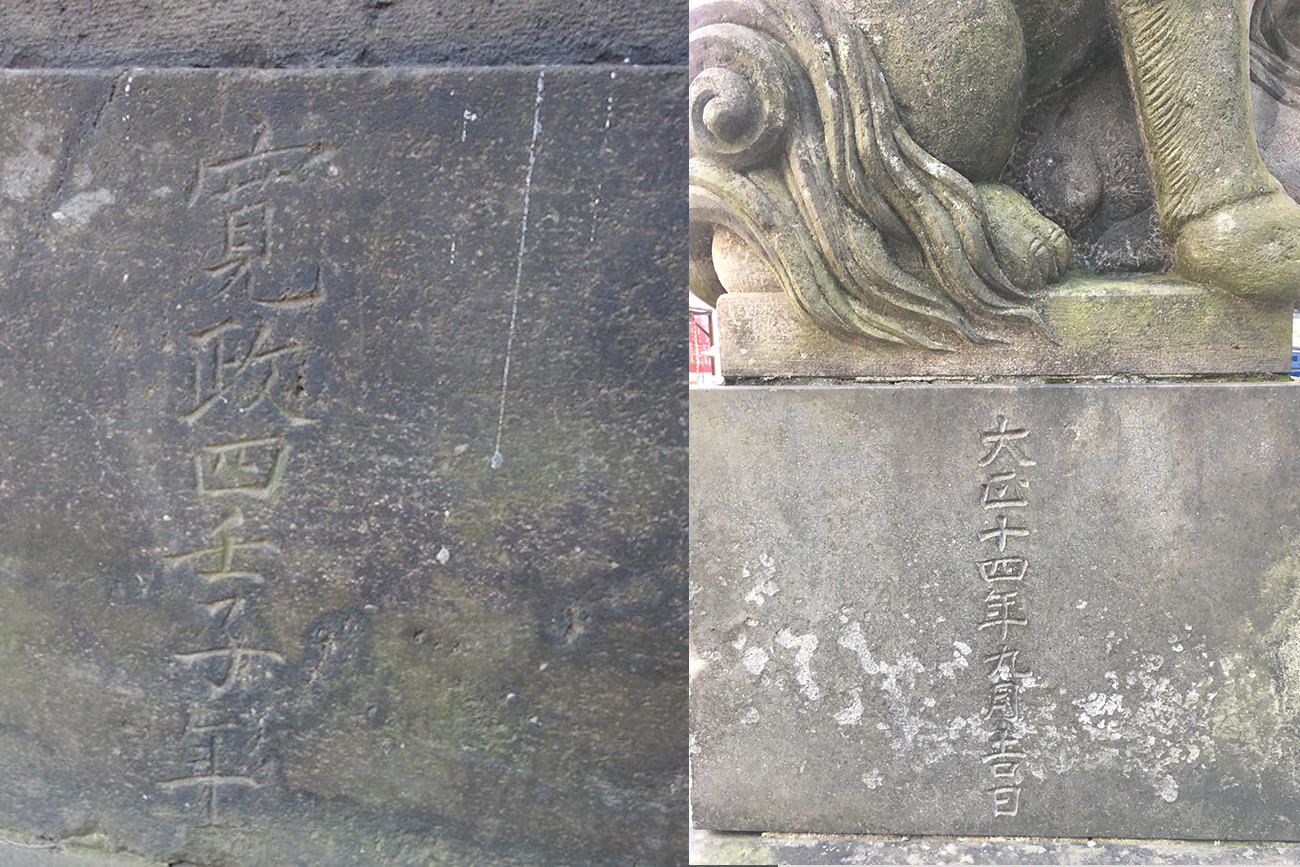 These are also very attractive. However, what fascinated me most was the unique komainu with marble eyes (donation year unknown) in front of the Mitake Shrine, one of the branch shrines.

The small body is made of concrete, and the pupils of the eyes on the “A” side (literally “A-shape”) are different colors, making this a rather stylish pair.

Their cute, completely unintimidating, appearance is sure to make you feel better. This is just a short boat ride from the jetty in front of Onomichi Station. At the shrine in Mukaishima there is a water bowl that has long captivated fans of komainu.

The highlight of this bowl (for ritual cleansing of hands and mouth with water when visiting shrines), donated in 1836, is its large spherical shape.

Although the stonemasons of Onomichi were good at carving spheres, their skill in carving such a large and beautiful spherical washbasin is impressive. The lion relaxing on top is also very appealing. In front of the museum in the precincts of the shrine, there is a pair of large, round-faced, dog-like komainu donated in 1647.

It is thought that they were once placed in the form of A-un, but only the “A” form remains. Not only do they have charming faces, but their whole bodies are well proportioned. It is hard to believe that they were made hundreds of years ago, and they have the charm of a plush toy.

At the Kanei Shrine, which is famous as a matchmaking shrine and a sacred space with spiritual energy, there are “guardian dogs” that pray for ‘stoppages’ – or the ending or prevention of certain personal problems. The practice of attaching string to the feet of guardian dogs to pray for stoppages is found in many places, but the string that is attached varies in design from shrine to shrine. The Sueyama shrine is located in the production area for Arita-yaki porcelain. The largest bronze komainu in Japan are wonderful, but it’s the huge white and blue Aritayaki-ware guardian dogs that tickle a girl’s fancy.

There are white and blue lanterns and torii gates in the precincts, making it a beautiful place that is typical of a pottery village. Many of the gifts are also made of ceramic. It’s hard to decide which of these refreshing white and blue items to buy.